Once a MySQL server is set up, the first task on any database administrator’s list is to prepare for backups. To execute backups, sysadmins can run them directly on the server. In most instances, though, they will access the server remotely.

DBAs can do this using the MySQL Workbench or an application like phpMyAdmin. But beforehand, sysadmins must install and configure the applications for use. This adds new maintenance and support work. It also introduces another potential point of failure in the MySQL stack. Third-party applications require extra software. These requirements increase the possibility of introducing a security bug.

A simpler approach is to use command-line tools to access the MySQL server to execute backup/restore command. MySQL comes with a suite of command-line tools specifically for that purpose. They have no dependency on external providers. When a security bug is discovered, it will be patched automatically as part of regular updates. Command-line tools also have an added benefit: they can be added to a script and executed without human intervention.

Automate MySQL backups, via SSH tunnels, in a couple of clicks.

In most situations, administrators don’t have physical access to database servers. Sometimes, they might not be allowed to login to the server directly. Instead, they must execute all commands remotely from their desktop computer. They need an approach that allows them to connect to the server remotely and securely.

In this post, we will look at such an approach to back up and restore a MySQL database: SSH tunneling.

What is SSH Tunneling?

Secure shell (SSH) tunneling allows for secure remote access to resources without exposing them to the world. It provides end-to-end data encryption, meaning that an unwanted party cannot intercept data. This makes it ideal for applications where security is required.

The encrypted connection provides privacy and security to the application that uses it. The application can transmit data securely over an insecure or untrusted network such as a home network or a public Wi-Fi network.

With SSH tunneling, sysadmins and DBAs can connect to a private network or computer without sharing files and settings. Once they have established an SSH connection with a remote server, they can use commands as if accessing the server locally.

What is local port forwarding?

Local port forwarding is a technique that allows a user to redirect traffic from their computer to a remote server. The server can be on the same network or on the internet. Users to set up a connection between two devices without exposing the connection information. It works by opening ports between the client (e.g., a laptop) and a remote server (e.g., a MySQL database server).

Once the two devices establish a connection, a user can execute commands locally, but those commands execute on the remote server. Local port forwarding simplifies system and database administration.

How to connect to mysql via ssh tunnel

To back up a MySQL database using local commands, you first need to set up secure local port forwarding to the MySQL server. This will prevent other from intercepting the data flowing between the system administrator’s machine and the MySQL server.

Local port forwarding can be set up interactively (on the command line or in a script) or with a specific configuration file. With an interactive setup, users control the SSH tunnel from the command line. They can easily cut the connection between machines.

Setting up an SSH tunnel interactively

To begin, local port forwarding requires a valid SSH server installation on the remote server. The examples below use the Linux/Mac command-line tool, but Windows users can use Cygwin or PuTTY to obtain the same behavior.

Open a terminal and execute the following command:

Setting up an SSH tunnel configuration

When using a configuration file, the SSH tunnel can be started as follows:

How use mysqldump via SSH tunnel

Once the SSH tunnel has been configured correctly, it is possible to execute a backup of the remote MySQL server by using local commands.

The resulting file will contain all the information needed to recreate the database and populate it with the existing data at the time of the backup. Backup time depends on the amount of data in the database.

A backup using mysqldump creates a standard text file with a series of SQL statements that reinsert the data into a database. Therefore, restoring data consists of executing these statements.

The process to restore a MySQL backup is like the one used to create the backup. First, set up the SSH tunnel, then execute the restore command for MySQL, as follows:

Open a new terminal (or use the same one if using the -f option).

Type the command below:

If the database does not exist and dumpfile.sql does not contain the appropriate SQL CREATE command, then database_name must be created first.

Remote backup of MySQL databases using SSH tunneling allows the backup client to connect securely to the remote server. The remote server appears like a local machine. This makes it easier to create and maintain backup scripts.

SSH tunneling for backups easy to put in place and can expand as a company’s database backup needs grow.

NOTE: We focused on command-line Linux/Mac commands. Some of the links provided were specific to Linux. 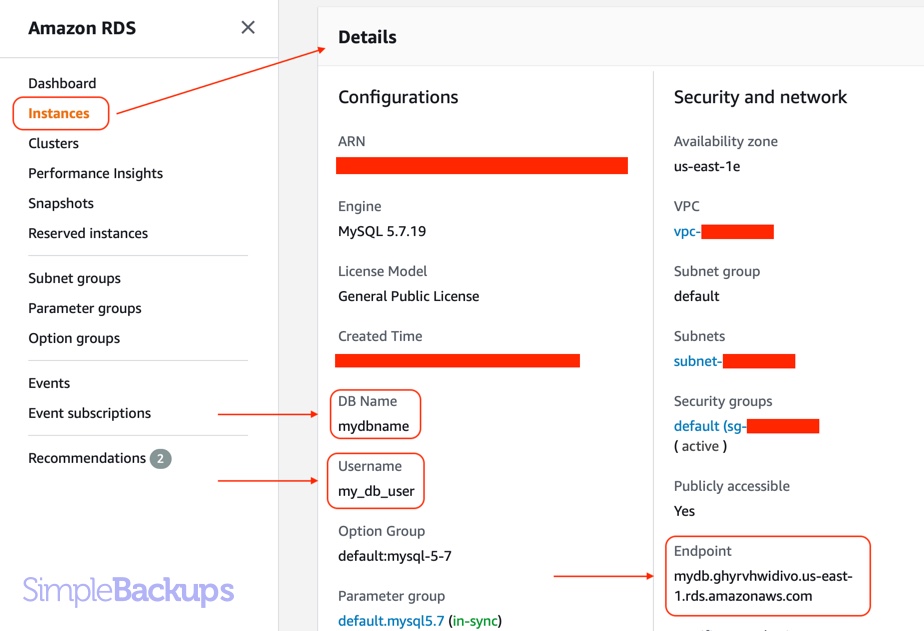 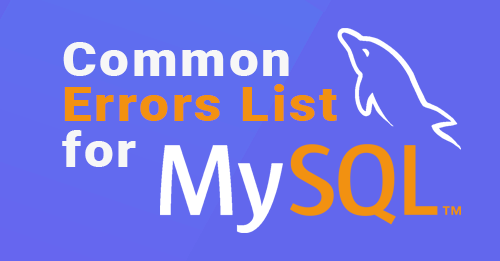 Errors or mistakes are common in any aspects, especially in development. Using MySQL or any database can't guarantee you an error-free… 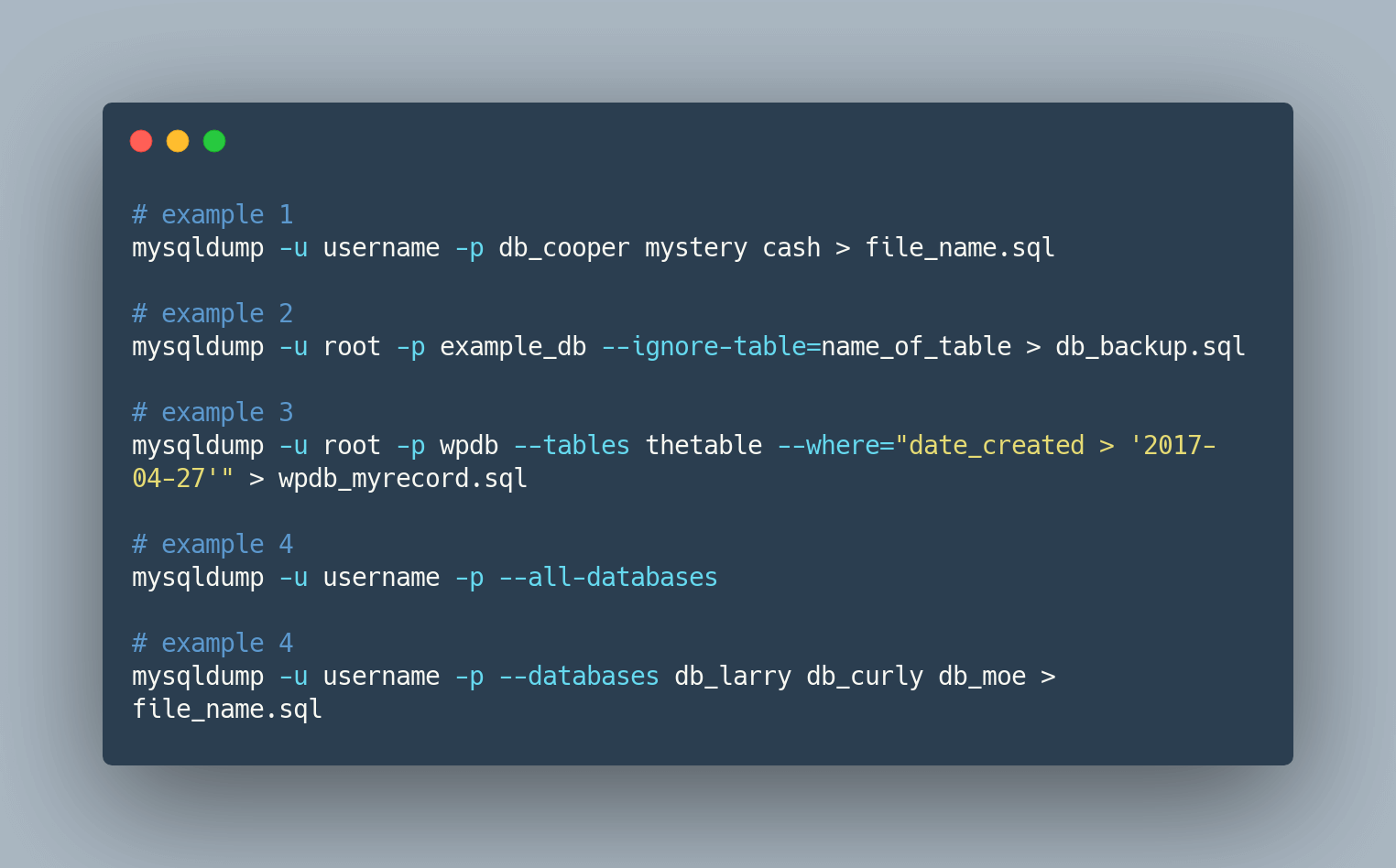 The Complete mysqldump Guide (with examples)

Databases are essential tools to collect and store mountains of data. All complex applications use them to store information. There are many…

Unlock no-code & optimized backup, for all your projects.